Posted at 06 Jan 2012 in Podcast by Chris Laxamana 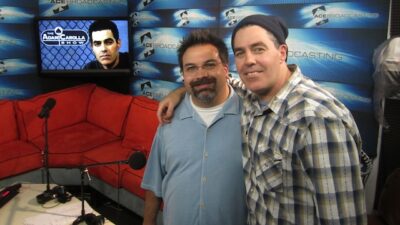 As the show opens, Adam talks about sledding with the kids in Lake Tahoe. He then goes on to tell some more stories from the set of Celebrity Apprentice, and compares the show’s ‘tasks’ to a helpful improv class he once took. Adam also takes calls about drinking cheap beer, dating a virgin, and seeing punk shows in the 80s. Rotten Tomatoes’ Editor in Chief Matt Atchity joins the podcast next, and talks with Adam about some ridiculous movie clichés. Adam also complains about crappy movies with positive reviews, and demands that some of the top critics be removed from the site. Later they discuss some upcoming 2012 movies, including a bunch of unnecessary sequels and remakes.

Alison starts up the news next, and the group watches the Casey Anthony video that surfaced earlier in the day. She also gives an update on the Hollywood arsonist, and Matt mentions a personal connection through the Rotten Tomatoes offices. The show wraps up with Adam recalling a Silence of the Lambs-esque experience he had, and the worst cigarette break ever.

Check out www.RottenTomatoes.com, and give The Hammer a 5-star rating while you’re at it!